View source
watch 03:47
'Monster Hunter' - Meet the Zinogre
Do you like this video?
Play Sound

Zinogre is a quadrupedal monster with superficially lupine features. It has highly developed limbs, sharp fangs and claws. Its forelegs are extremely powerful and can kill prey in one brutal blow. Despite its hulking size, Zinogre is very agile and is able to perform many impressive aerial and land-based maneuvers. The spikes on its body mostly lie flat, but when it has built up an electric charge they stick out vertically into the air.

Uniquely, Zinogre can 'charge' itself by summoning Thunderbugs from the vicinity, utilizing their natural electrical abilities for its own purposes, during which time its claws will emit blue light similar to the markings on its back.

This charge can be lost if Zinogre takes enough damage; if this occurs Zinogre becomes much less aggressive as a result (at least until it can build up another charge). If the charge is lost, Zinogre will at some point attempt to gather Thunderbugs in order to increase its attack power. During this charging state, Zinogre is left vulnerable to attacks, and Hunters have approximately 6-7 seconds to stagger Zinogre and cancel the process.

The charge has two levels; first, a weaker preliminary charge will form, and if Zinogre charges up again, a stronger charge will form. Each state of charge means Zinogre will deal a corresponding level of damage and become more agile, but beware; Zinogre can enter a traditional enraged state even in its final charge state. At this point its body will glow an electrical blue and its attacks increase even more in power. If the hunter is hit by its electrical attacks, it will cause Thunderblight.

The states of charge can be determined aesthetically; after its first charge, numerous Thunderbugs fly around Zinogre's body, and after the second, all Zinogre's fur stands on end in spiked clumps to release excess electricity.

Zinogre are solitary hunters, roaming their territory for prey. They are aggressive and will attack intruders on sight.

For carves and materials from other games, see Zinogre Carves 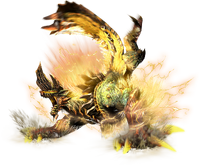 A Deviant of Zinogre first appearing in Monster Hunter Generations. 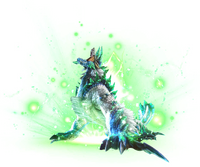 A Variant of Zinogre first appearing in Monster Hunter Explore. 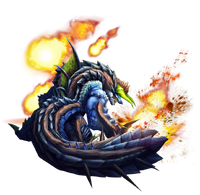 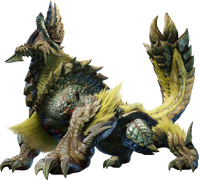