View source
watch 01:31
What is Zorah Magdaros?
Do you like this video?
Play Sound

Zorah Magdaros is a colossal semi-aquatic Elder Dragon covered in a rocky hide. It has turtle-like characteristics, bearing a mountainous shell on its back that it can retreat under while walking on all fours, as well as a beaked mouth. Fire, smoke, and lava constantly radiate from the creature's shell, making it more akin to a walking volcano than a typical creature. Zorah has three magmacore organs located on its back and a fourth on its head that act as weak points.

Zorah Magdaros cannot be killed by normal attacks, and can only be repelled through a siege encounter. Its head and chest can be wounded by physical attacks, while it is also immune to all status effects. During the first phase of the fight, mining spots appear in various outgrowths on their back. These contain uncommon and rare ores and rarely Zorah Magdaros parts. Zorah Magdaros does not attack the Hunter directly, instead raining lava bombs and releasing blasts of lava from its magmacores. It only actively attacks when Nergigante appears, and it targets the enemy elder dragon instead of the Hunter. During the second phase of the fight, Zorah Magdaros will slowly advance towards the barrier and try to destroy it, requiring ballistas, cannons, and a Dragonator to fight back. It will often charge up energy and release a massive blast that deals heavy damage to the barrier. Restraining or flinching Zorah is the only way to stop the attack, and with Arch-Tempered Zorah Magdaros this becomes necessary due to the greatly increased damage that it deals. It may also ram its head into the barrier; hunters can climb on its head to attack the magmacore.

The following is a complete weapon list for Zorah Magdaros weapons: 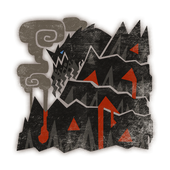