Khezu are Flying Wyverns introduced in Monster Hunter. They are known to inhabit subterranean areas and can be encountered at Low, High, and G Ranks. 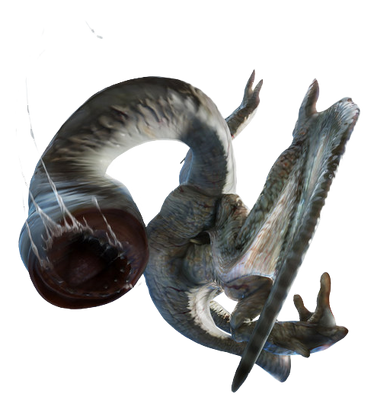 Khezu are large, pale Wyverns with a flabby, rubbery hide which they constantly keep damp, similar to that of an amphibian. Many of their blood vessels and veins can be seen through their pale skin. Their tail features a specialized orifice which bonds to the ground during electrical attacks and helps them cling onto cave ceilings. Their mouth features rows of sharp teeth. Khezu feet lack claws, and instead have suction pad-like toes to assist them in climbing and hanging from cave walls and ceilings. Spending most of their lives in the dark, their eyes have regressed greatly, though they make up for this with a superb sense of smell. A layer of fat helps to keep them warm and prolong the time they can spend hunting for food. Khezu have an extendable neck which allows them to grasp and ambush prey from afar, such as from a cave ceiling. Khezu are hermaphrodites, which means an individual is both male and female. To reproduce they paralyze a creature and inject their young, known as Whelps. The Whelps grow inside their victim until it dies, or when they are strong enough to leave.

Although Khezu are cave dwellers, they go out when they please, or when food inside grows too scarce. While Khezu outside a cave are vulnerable to larger Wyverns like Tigrex, inside caves Khezu have the advantage. In addition to being unhampered by the dark, they can cling to the ceiling and attack from above.

A Khezu's habitat is often located near active sources of water; some sources claim this is because the water is excellent for conducting electricity into their prey, while others speculate that Khezu may need the dampness for their moist skin. Such areas include the Swamps and Frozen Seaway. 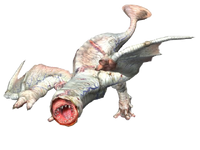 HC Khezu has a slew of new attacks; it can now fire multiple lightning balls across the ground that scatter widely, and is also capable of firing these same lightning balls upon landing. It occasionally covers itself in electricity after performing an electrical ball attack as well. Lastly, it also has a much shorter but stronger roar that paralyzes hunters without earplugs for a longer time.[1]

HC Khezu appears to have a brownish colouration on certain parts of its body and large, visible blue veins. It also has new attacks and behaviors. It can create an onslaught of electricity that can fatally paralyze any hunter caught in it while generating short bursts of electricity on its body at the same time. Additionally, hunters have observed that it will perform a new screaming behaviour where it rises up tall and screams briefly to stun hunters, while quickly following up with a shock wave. This deadly combination of attacks leaves no escape for the unprepared.

One of its most confusing attacks may be when it hovers with a thunder ball in its mouth around a targeted hunter then releases it with pinpoint accuracy upon landing with an electric barrier active at the same time.